Carnival is generally not celebrated in the United States, where Protestantism is much more common than Catholicism. Nonetheless, in a few parts of the country, Catholicism is widely practiced. Louisiana, home to Spanish and later French settlers, is one such region. Carnival, called Mardi Gras (“Fat Tuesday”) in Louisiana, in honor of the last day of the festival, is celebrated throughout the state.  In Catholic practice, Mardi Gras (“Fat Tuesday”) is the last day of celebration of Carnival before the fasting period of Lent. In the United States, the holiday is nowhere more vigorously celebrated than in the city of New Orleans. There, a two-week Carnival season terminating on Mardi Gras is celebrated with parades composed of elaborate costumes 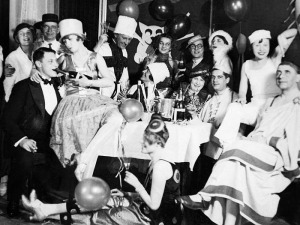 and masks, floats, and thousands of other paraders, all organized by private “krewes” composed of public-spirited citizens dedicated to preserving the Mardi Gras tradition. Krewes tend to have a fairly constant structure of officers, who frequently ride horseback in handsome costumes and white draped masks, float riders who chuck “throws,” or small gifts such as plastic beaded necklaces, toys, or mementos (usually with the krewe’s name and insignia) into the cheering crowds, and a “king” and “queen” of the krewe. Float riders are required by New Orleans ordinance to wear masks, and officers do so to preserve anonymity.  Half masks with a veil over the lower face are normally worn by officers of the krewe who are charged with organizing the parade every year.  Among the older krewes, the officers ride horses, wearing elaborate headdresses with feathers.  The mask they wear is nearly always a cloth “domino” type mask with a veil over the mouth to allow relatively unimpeded talking and drinking. 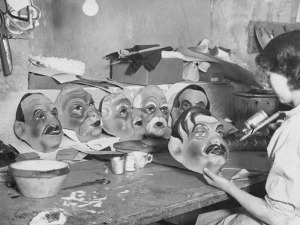 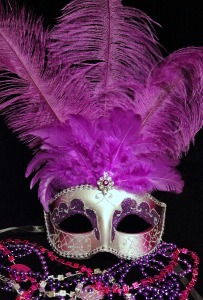 Krewes vary in size, from small groups of two dozen or so up to the “superkrewes” with thousands of members. The krewes fund their own parades and balls, with no government assistance. Parades of the superkrewes, with smaller krewes in between, travel through downtown New Orleans daily for nearly the entire two weeks of Carnival, with the last parades on Mardi Gras. The krewes parading on Mardi Gras include the largest superkrewe, Rex, and the Zulu Social Aid and Pleasure Club. Night parades are preceded by traditional torch carriers known as “flambeaux,” followed by the masked krewe officers, usually on horseback, then the king and queen of the krewe chosen for that year. Some krewes have adopted Zulu’s ritual of choosing a celebrity king as well. Floats are interspersed with smaller dance krewes, high school and college marching bands, color guards, cheerleaders, dance troupes, and similar groups, some as famous as the superkrewes.

Mardi Gras in New Orleans is also typically celebrated with formal balls held by the krewes in honor of the king and queen, and to celebrate the season.  Mask wearing among street celebrants is common as well. Traditionally, Mardi Gras masks are made of formed and painted buckram, paper maché, or leather, and can represent any character from real life or fantasy.  In modern practice, cheap masks mass manufactured of sequined cloth or paper maché covered in dyed feathers have become common. 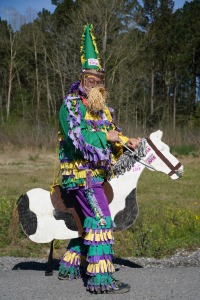 Other cities and towns in Louisiana celebrate Mardi Gras as well, although none has parade floats and krewes that even approach the size of those in New Orleans. Some stage parades as in New Orleans, but in Acadiana Country in the southern swamps of Louisiana, Mardi Gras assumes a very different and more traditional form. There, the descendants of French Canadian immigrants known as “Cajuns” (short for “Acadians”) celebrate Mardi Gras in a manner quite different from the better known Carnival of New Orleans.  The Courir de Mardi Gras (Mardi Gras parade) occurs in most towns of Cajun country only on Mardi Gras itself, although some hold their courir the weekend before.

Cajun masqueraders wear full or partial wire mesh masks and quilted suits with tall, conical hats covered in colorful fabric.  They either ride from farm to farm on horseback or drive as a group in trucks with an unmasked leader wearing the traditional Mardi Gras colors of green, purple, and gold.  When they reach a farm, the captain, who carries a whip in one hand and a white flag in the other, approaches the farmer and asks: “Le Mardi Gras demande votre permission pour visiter ta maison” (“The Mardi Gras requests permission to visit your house”), or words to that effect. Upon assent, the revelers descend and run or crawl toward the house, singing a begging song, then exploding into pranks and comedic antics while the captain tries to subdue them with his whip. The only way to make them leave is to donate money or a gift, traditionally a bag of rice or a chicken for the evening gumbo, in which the farmer is invited to partake. In modern practice, sometimes the leader will throw the chicken into the air, forcing the Mardi Gras to chase it through mud and bushes, with the winner gaining the honor of carrying the chicken afterward. 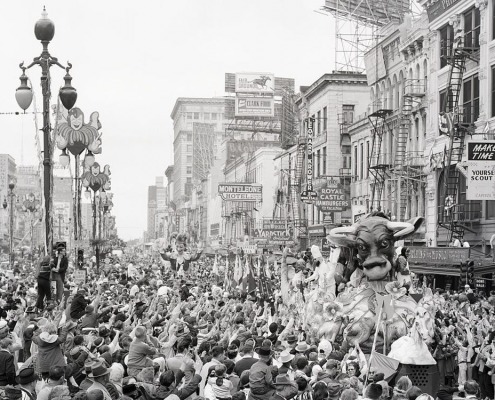 The Krewe of Bacchus parades through the streets of New Orleans, some time between 1890 and 1910. 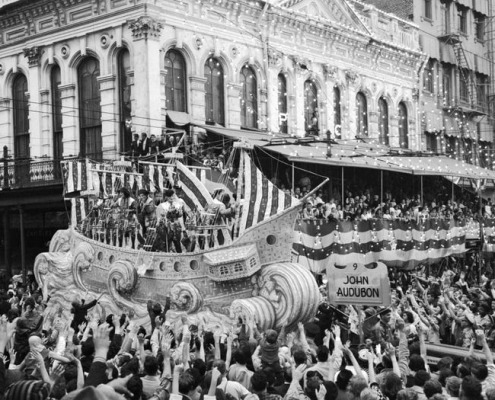 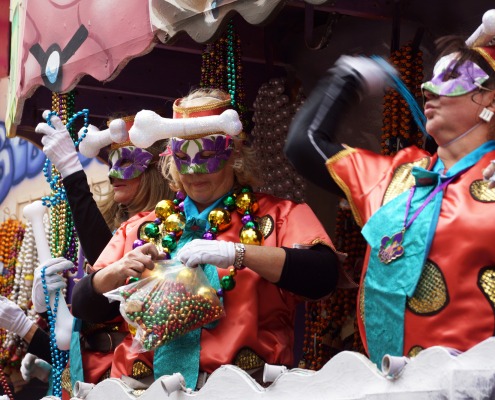 Float riders in the all-female Krewe of Iris throwing favors to the crowd, 2014. 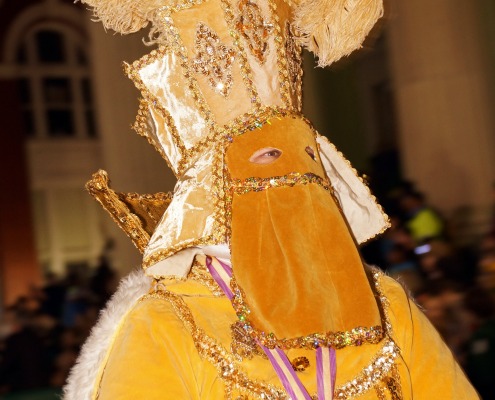 An officer of the Hermes superkrewe rides before the parade floats. 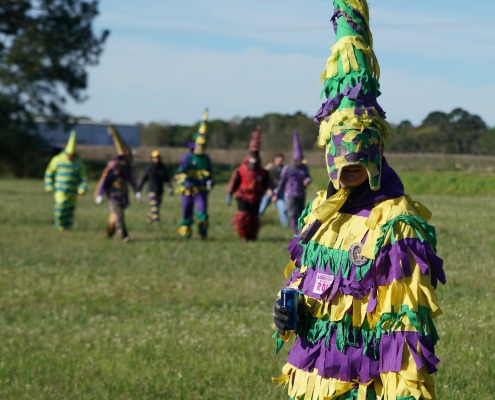 A group of Cajun Mardi Gras in Eunice, Louisiana prepare to chase a chicken.

The Carnivals of Galicia, Spain
Scroll to top Second Face