The Carnivals of Galicia, Spain

The Carnivals of Galicia, Spain

As a pervasively Catholic country, Spain has a rich diversity of Carnival traditions that date back many decades and even centuries. These traditions frequently include masquerading dances, parades, and ceremonies. In the far northwestern region of Galicia, Carnival traditions are especially rich and diverse.  Each town, and sometimes each neighborhood, has its own archetype of Carnival character.

In a few cases, such as the peliqueiros of Laza, the cigarrones of Verín, and the Felos of Macedo, a strong family resemblance is evident. But the pantallas of Xinzo de Limia have very little in common with the boteiros of Viana do Bolo, and even less with the galos of San Pedro da Mezquita. 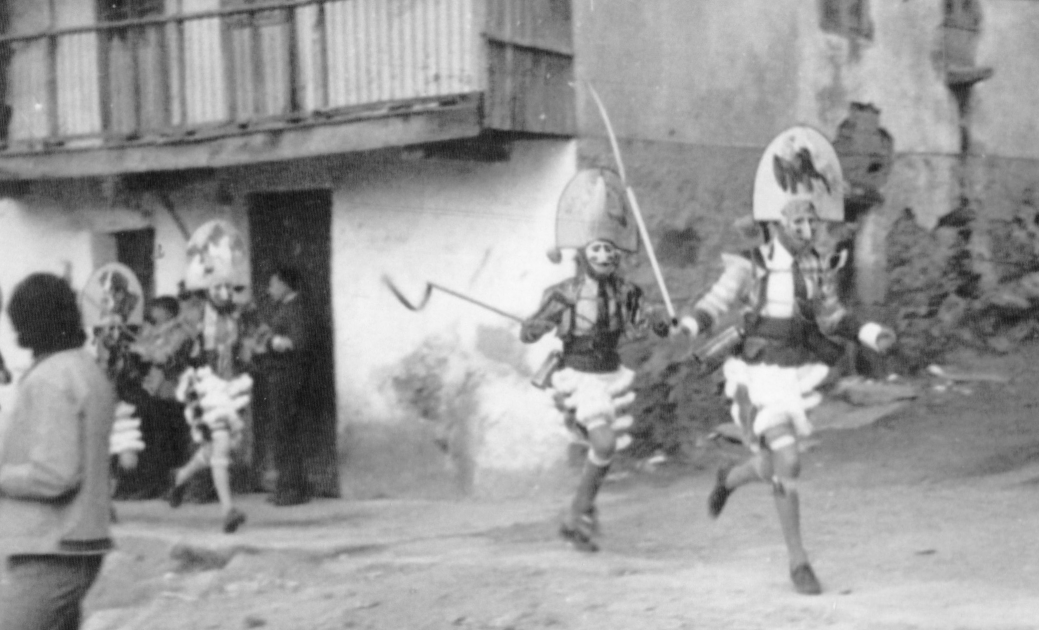 The Carnival traditions often include a wide variety of activities, such as music, games, contests, and culinary events. The masquerades stand out, however, as highly ritualized. For example, the peliqueiros of Laza and the cigarrones of Verín run through the town in a line, jingling loud bells on their waists and swinging wood and leather whips that they use to punish anyone who does not show proper respect. They also parade through the town as a group, sometimes numbering in the hundreds, at selected times. Each mask has a mitra that forms a kind of semi-circular hat with a totem of some kind, usually an animal but sometimes another symbol. The costume is highly regimented and unique. 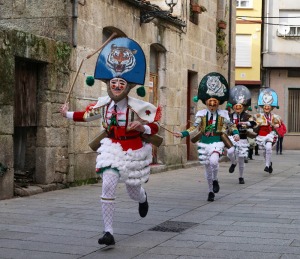 Cigarrones run through the streets of Verín during Carnival. 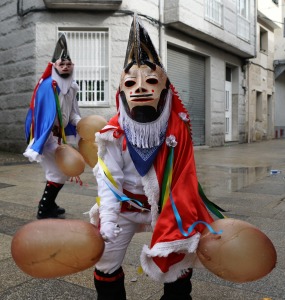 The pantallas of Xinzo de Limia dance in small groups, bashing inflated cow bladders against each other and dragging Carnival celebrants into bars to buy them drinks. The Pantalla wears a brightly colored cape and white suit with black boots, and the mask has a headdress shaped like a seashell with paintings of the night sky on either side.

In contrast, the boteiros of Viana do Bolo take on different appearances, depending on the neighborhood from which they come. The boteiros jump or vault to display their agility, and some have an iron headdress attached to the mask, covered in colorful paper, to tax the strength of the boteiro. The boteiros parade in large groups, accompanied by large bands playing drums or other traditional musical instruments. 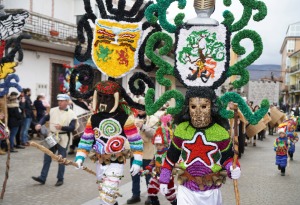 Boteiros on parade in Viana do Bolo.

In some cases, such as the equestrian xenerais of Ulla, masks are not usually worn, but a strictly regimented costume must be donned.  In others, such as troteiros of Bande,  there is no special costume, but the mask is a perforated cloth covering the face, held on by a hat covered in mirrors to reflect back any ill wishes directed at the masquerader. The troteiros roam the streets of Bande, using their canes to harass women and old men with impunity. As in many other Spanish towns, the Carnival ends on Ash Wednesday with the burial of a sardine, which symbolizes the discarding of the past so that society can be born anew in the springtime following Lent. 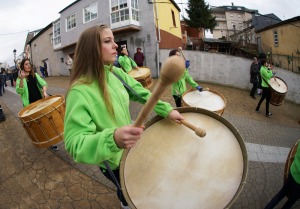 Drummers accompany the boteiros in the Carnival of Viana do Bolo.

Perhaps the strangest of all are the galos of San Pedro da Mezquita, who wear a simple cloth mask with a paper maché rooster on its head. This tradition dates back at least 250 years. The costume itself is extremely showy, with seven colorful scarves adorned with gold costume jewelry. the galo carries a stick as well. The rooster is thought to represent the tax collector, with the gold representing his riches and the stick his power of intimidation. 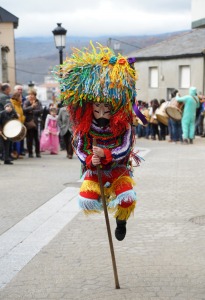 A boteiro shows off his vaulting skills.

These descriptions are far from exhausting the variety of masquerading traditions in Galicia. Despite having fewer than 3 million inhabitants, Galicia has many dozens of different traditional mask and costume types. In some cases (such as the galos of San Pedro and the vellarones of Riós, traditions have had to be resurrected after going moribund and being forgotten during the long fascist rule of Francisco Franco.

Fortunately, records have been found and these traditions renewed in the modern Spanish democracy. Some modernizations have occurred, however, with women now participating as masqueraders alongside men, who formerly monopolized masquerades. A visitor to Galicia can therefore enjoy several Carnival traditions in the same year by touring the region in the week leading up to Carnival. 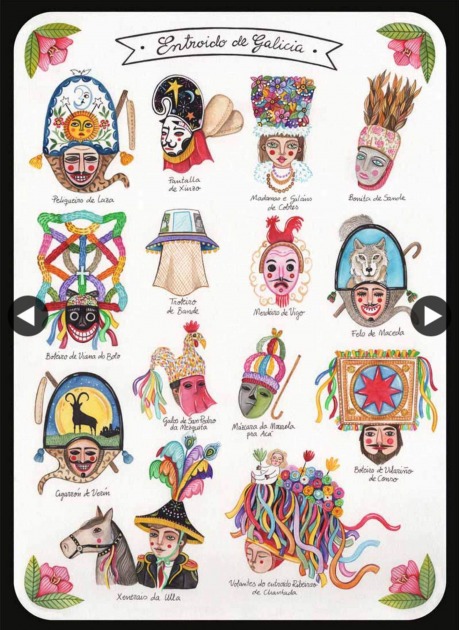 Some of the Carnival mask types of various towns in Galicia. 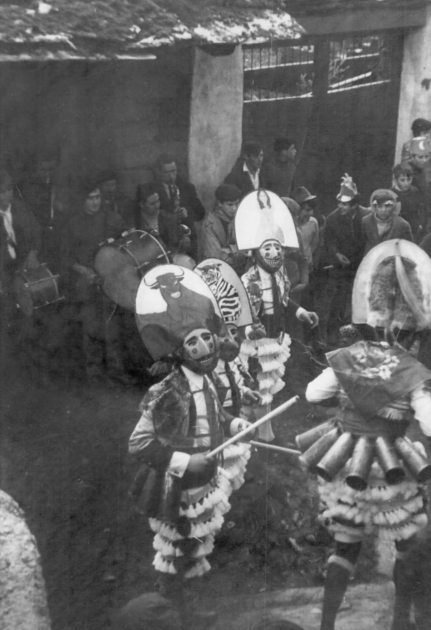 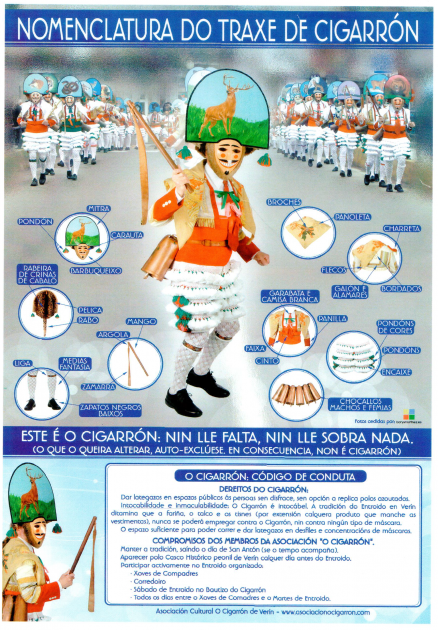 The names of the parts of the cigarron‘s mask and costume, in the Galician dialect. 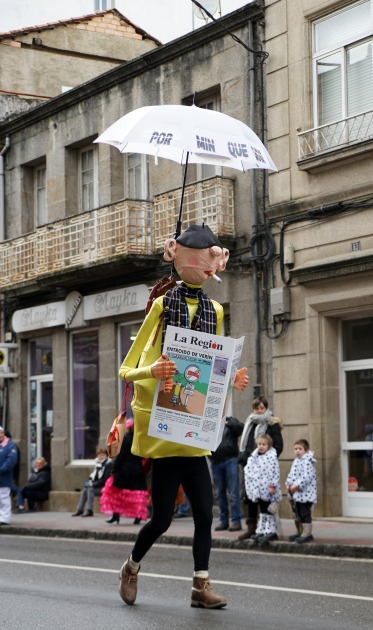 A costumed giant strolls along in the Carnival parade of Verín.