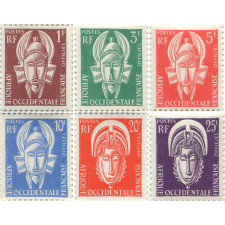 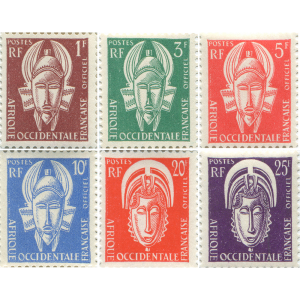 These stamps were issued by the French colonial government in 1958 for the territory of French West Africa, a colonial empire ruled by the French from 1895 until 1960. It comprised modern Benin (then Dahomey), Burkina Faso (then Upper Volta), Côte d’Ivoire, Guinea, Mali (then French Sudan), Mauritania, Niger, and Senegal. At the time these stamps were issued, France had begun converting its African colonies to “territories” within a “Communauté française,” effectively a relationship of suzerainty. The relationship was short-lived, however, as African territories began insisting on sovereign independence, which was granted to each in rapid succession. The masks depicted are from the Yaure people of Côte d’Ivoire.