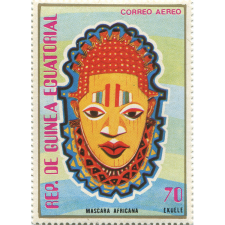 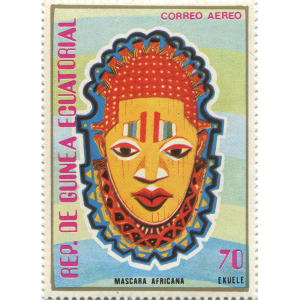 This stamp is one of a series of seven issued by the government of Equatorial Guinea to celebrate the masks of Africa. Each stamp depicts a more or less abstract painting of an African mask. Although the Fang people who inhabit most of Equatorial Guinea have a rich masquerading culture, oddly most masks in this stamp series come from cultures outside the country. In the case of this air mail stamp, the artifact depicted is an ivory pendant, probably worn around the neck, rather than an actual mask, from the Edo people of Benin around the 16th century CE.