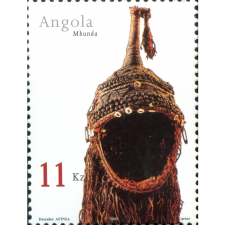 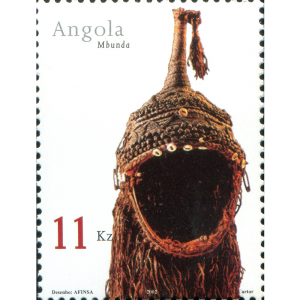 This stamp is one of a set, issued by the Angolan government in 2002, that celebrates the masks of Angola. Represented here is the mbunda mask of the Ovingangela people. This headdress would be used in a wide variety of rituals, including the boy’s adult initiation (circumcision) ceremony, weddings, births, and enthronements of new chiefs. The mbunda plays a clown function, making suggestive movements to entertain the audience by breaking taboos.