In this post, we’ll be exploring the Apache Ga’an Dance, an important, spiritual masked ritual of all Apache peoples that is kept alive today by the dedication of tribe members.

Who Are the Apache People?

The Apache people historically inhabited the southwestern United States and northern Mexico, specifically from eastern Arizona to west Texas on a longitudinal axis, and from southern Colorado to Sonora and Chihuahua on a latitudinal axis.  They formerly lived in independent tribes related by ethnic ties, following the herds of bison in a semi-nomadic pattern.  Their prowess and courage as warriors before United States imperialism was legendary. They now are concentrated in reservations in Arizona, New Mexico, Oklahoma, and Texas, or else are integrated in U.S. or Mexican society.  They number some 112,000 individuals and practice either their traditional animistic religion or Christianity, or both.

The messenger signals the start of the ceremony with his bull roarer. 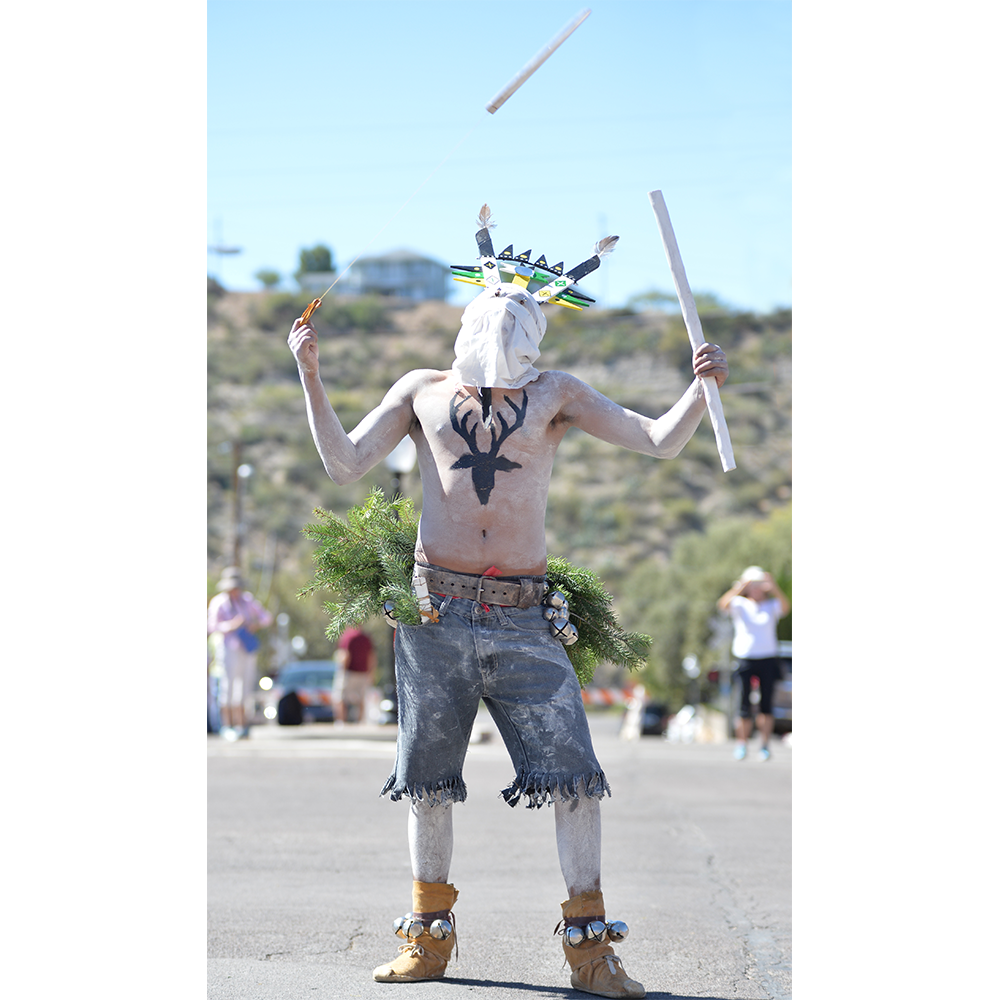 The Story of the Ga’an

The ga’an (Western Apache) or gaa’he (Eastern Apache) are powerful mountain spirits friendly to the Apache people.  The dancers represent mountain spirits during the ceremony and, as such, embody sacred beings.  There are various myth stories surrounding the ga’an.  One is that the ga’an were responsible for liberating the animal spirits locked in a cave where Crow had imprisoned them.  The animal spirits could then roam free and provide food for the Apache.

Another is that an Apache boy fell into a cave where ga’an spirits resided. When the boy died, he became one of the ga’an. Other tribe members came looking for him, bringing his dog, who recognized him among the ga’an spirits.  The boy eventually led the ga’an to his village, where the ga’an began a tradition of dancing to bless, heal, and protect the boy’s people.

The ga’an group always includes one messenger, who is sometimes referred to as a “clown.” The messenger really is a highly sacred being with a dual nature, both a frightening figure that scares evil spirits from the bodies of the sick and a comical teacher who facilitates healing through laughter. Unlike the other ga’an, who wear black or dark blue hoods and body paint, the messenger wears white.

Singers and drummers accompany the dancers. 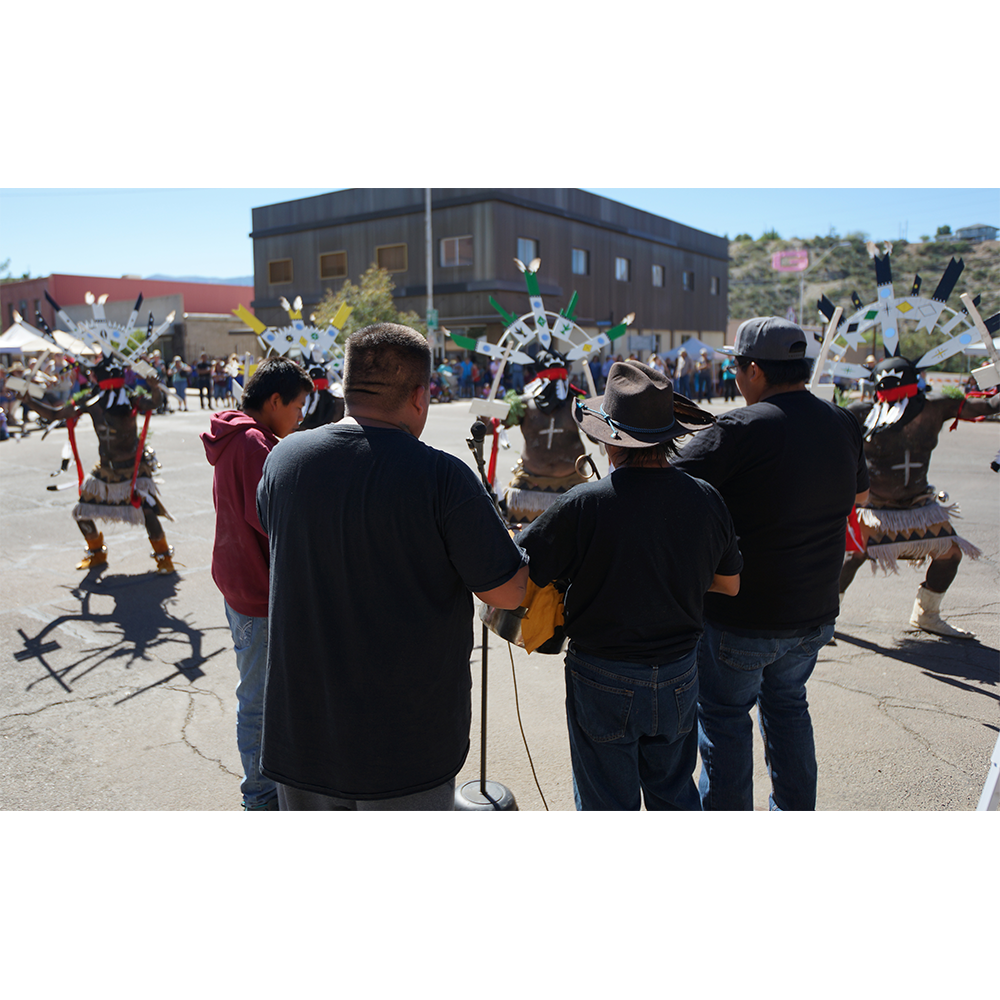 The ga’an ceremony is performed to drum and song, usually at night.  The groups always have five dancers: the messenger and four dancers representing the different cardinal directions (north, south, east and west).  It begins with the messenger using a “bull roarer,” or whistle on the end of a string, to create an ethereal sound announcing the start of the dance.  The bull-roarer is used uniquely by the Western Apache; others omit it.  All dancers except the messenger carry wood or yucca spike “swords,” usually with symbols painted on them.  The ga’an mask must be prepared by a shaman with great care, and the patterns, glyphs and colors on the crown all have symbolic significance.  Different colors represent the cardinal directions and symbols may include totemic animals as well as stars, crosses, and circles.  The bodies of the dancers are painted with symbols and patterns as well.

The messenger’s mask is usually smaller than the others and uses white cloth instead of black. The mirrors on the crown, a recent addition, flash as the ga’an dance, adding to the dazzling effect.  The Apache, like many indigenous peoples, associate mirrors with spirituality.  The small wooden slats that dangle from the mask create a clicking sound characteristic of the ga’an.  The ceremony is performed at na’ih’es (girl’s adulthood initiation ritual), also known as the Sunrise Ceremony; to influence the weather; to heal the sick; and to purify the village of evil spirits and protect it for the future.

If you visit the American southwest and plan appropriately, you may be fortunate enough to experience a ga’an dance in person.  It is possible to attend a ceremony on an Apache reservation at the invitation of the Apache Nation or during open festivals, such as Orme Dam Victory Days at the Fort McDowell Reservation.  The Sunrise Ceremony is typically held two or three times a month between April and October.  The more common way to observe the dance is outside the reservation; several Apache tribes periodically perform the dance for the edification of non-Apaches.  These events are held periodically at the Heard Museum in Phoenix, Arizona; at the Apache Ji’i Day celebration in Globe, Arizona; Grand Canyon National Park in northern Arizona; the Indian Pueblo Cultural Center in Albuquerque, New Mexico; and elsewhere. Observers should maintain silence and minimize movement during the ceremony to show respect for the dancers, drummers, and singers. 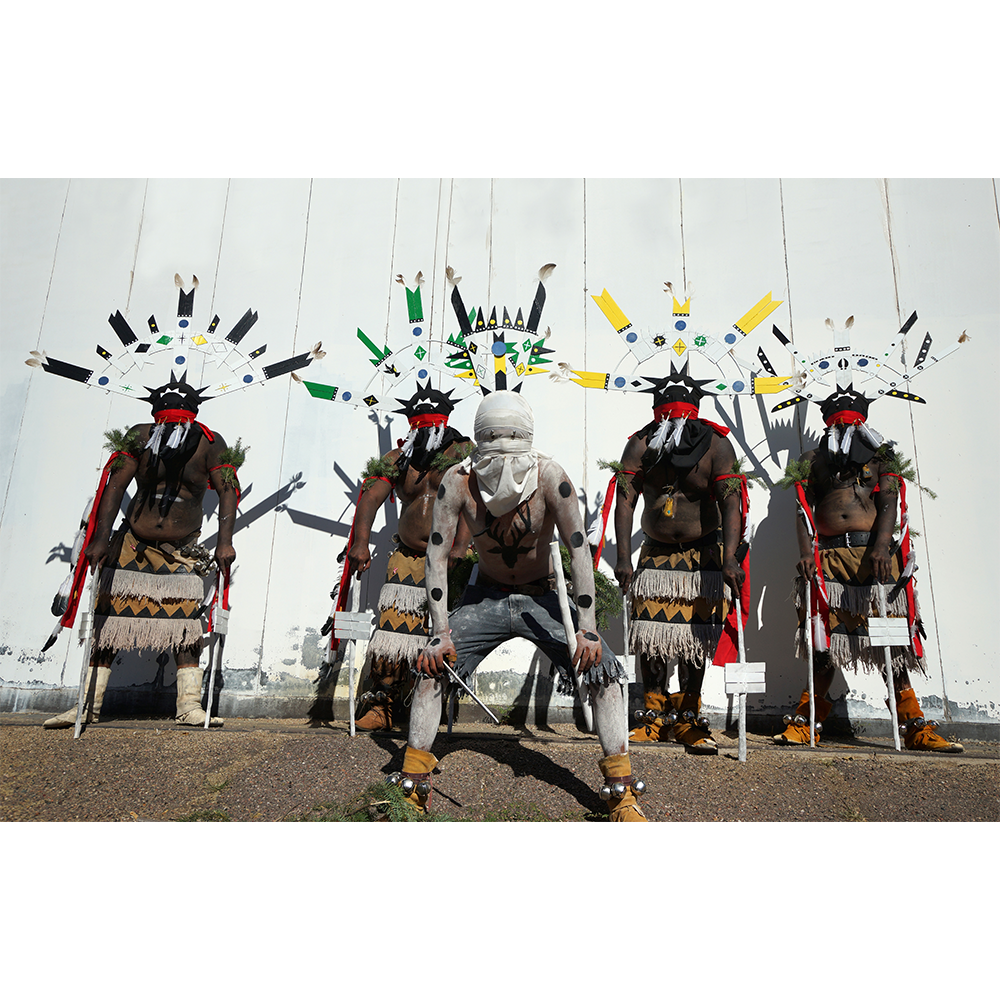 The Ga’an Dance is energetic and carefully choreographed. 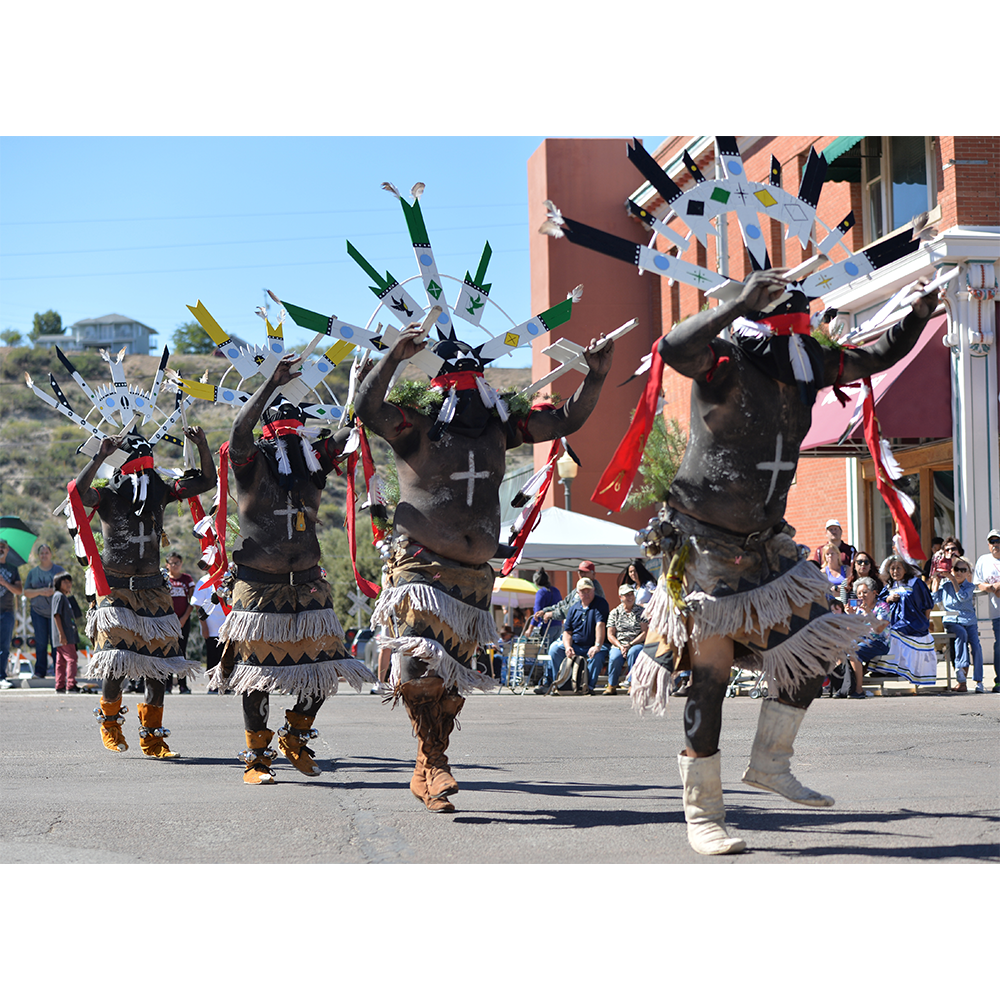 Each dancer has a different crown. 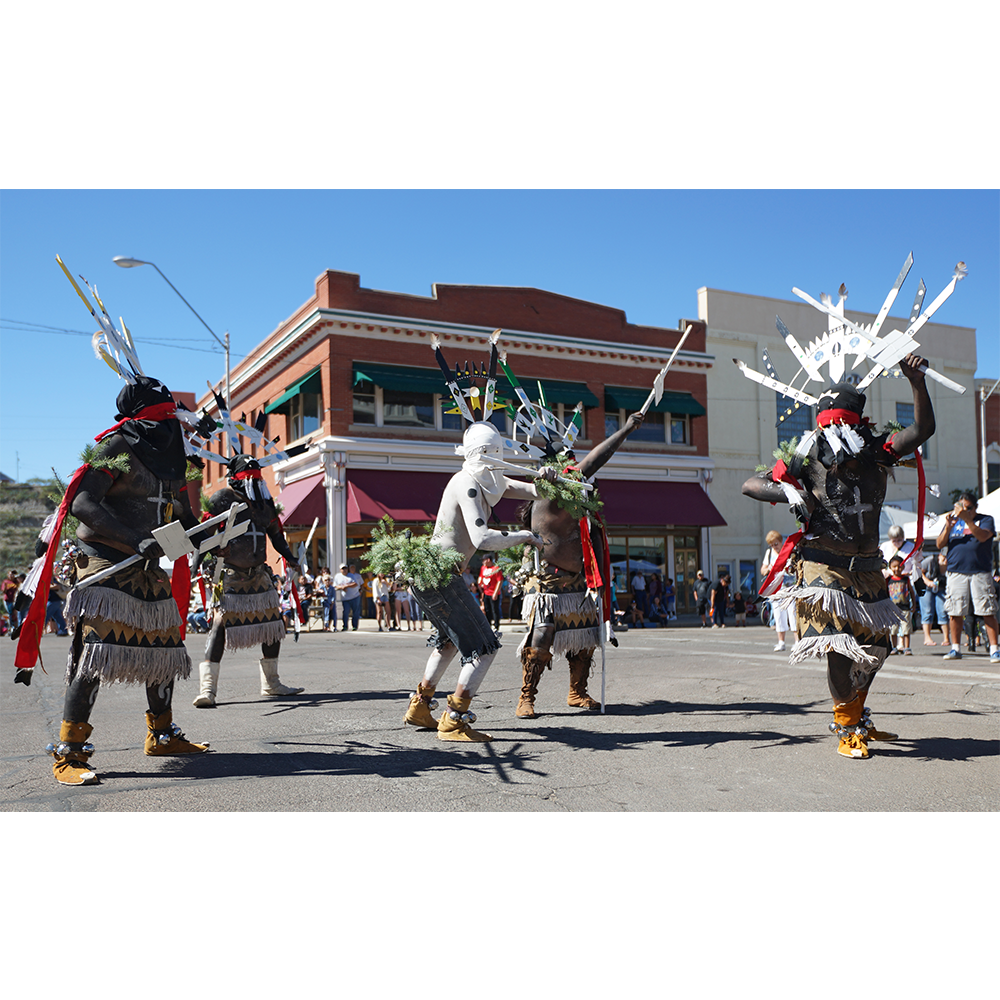 Apache boys are taught the dance as well, to train them for future ceremonies. 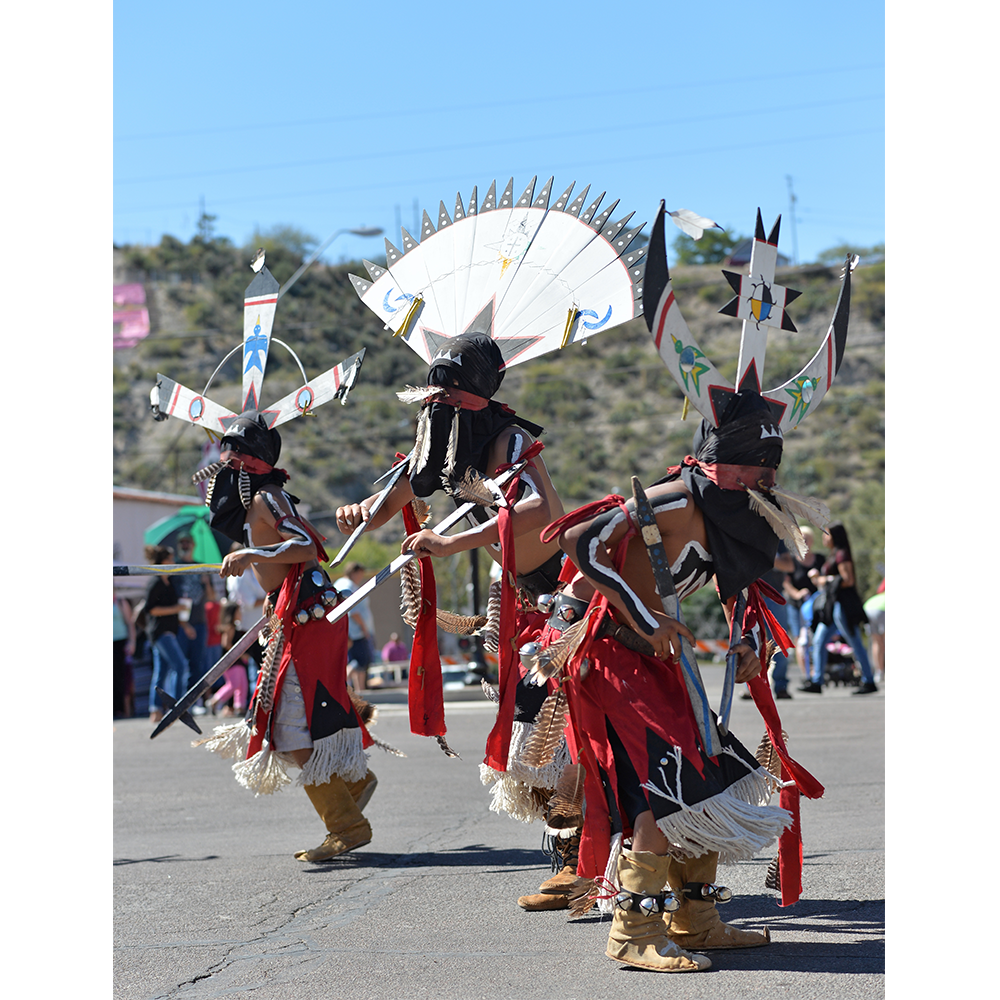 Crowns and swords were traditionally made from spikes of the yucca plant, but today are made of wood. Some symbols are abstract and others represent totemic animals such as eagles, deer, or hummingbirds. 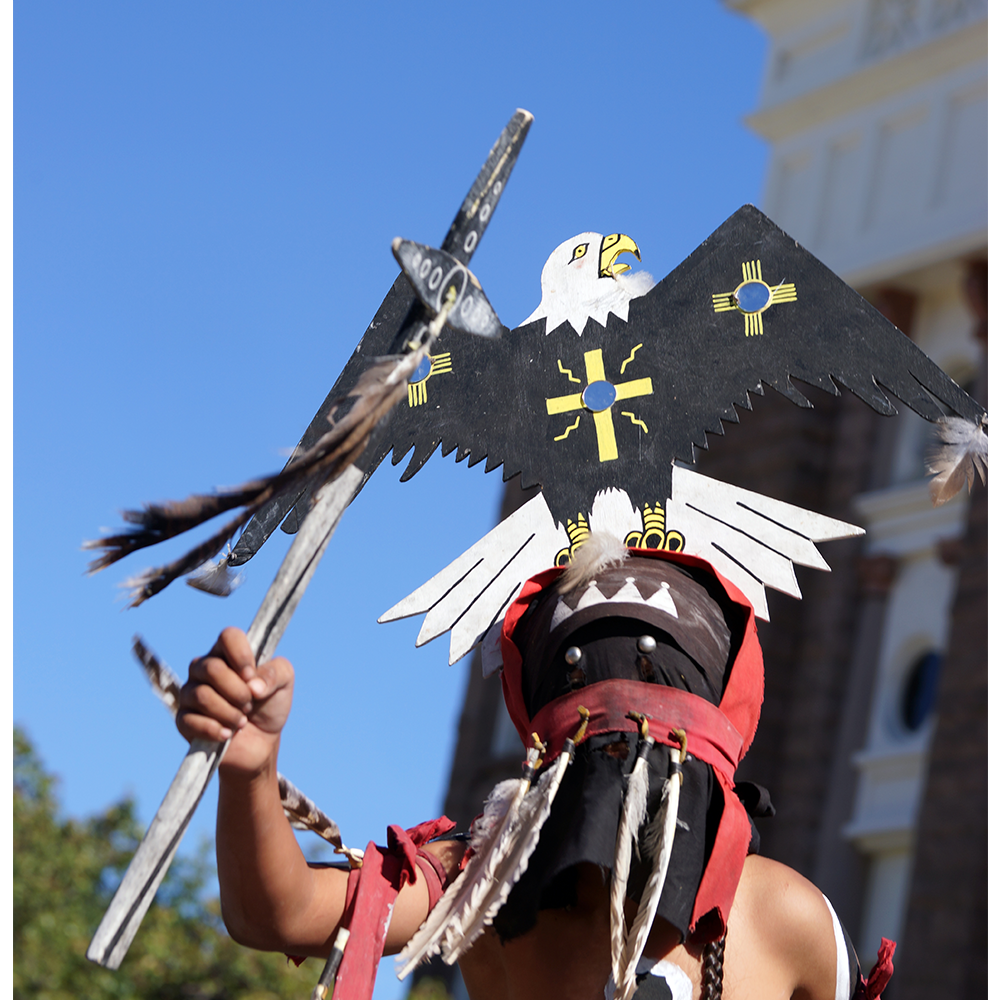 What Makes a Mask “Authentic?”