Alfredo García Córdoba on the Pilatos of Naolinco (with Aaron Fellmeth)

Naolinco is a small town in the Mexican state of Veracruz, a coastal region that borders the Caribbean Sea.  When the Spanish conquistadors arrived at the Aztec-dominated coast of Veracruz, their secondary goal (after looting) was converting the civilizations of the region to Catholicism. The process of dominating an ancient culture required force, but the Spanish missionaries also relied on propaganda. As elsewhere in the New World, missionaries sought to portray Catholicism as inevitably victorious over its enemies through stories and parables.

One such story was the Reconquest (Reconquista) of Spain by the Spaniards from the Moors, who had invaded in the year 711 and dominated much of the Iberian Peninsula for nearly 800 years.  Under the leadership of Ferdinand II of Aragon and Isabella of Castile, the last Moorish stronghold was defeated in 1492, the same year that Columbus sailed west looking for a passage to India. Although Muslims dominated the region for generations, the missionaries painted the eventual Spanish victory as a sign of divine favor rather than part of the inevitable ebb and flow of geopolitical history. In typical Manichean style, they portrayed the Moors as representing Evil and the Catholics as representing Good.

Another element of Spanish domination was eliminating traditional practices incompatible with Catholicism. Indigenous dances invoking Aztec gods for celebration, prayer, and war preparation were repurposed to reinforce the mythical retelling of the Reconquest. The dancers were now to represent the Catholics and the Moors in the struggle for Spain.

However, the Reconquest myth became mixed up with entirely different myths in some parts of Mexico.  In Naolinco and surrounding regions of Veracruz, the patron saint of Spain, James the Apostle (Santiago), represented the leader of the Catholic forces instead of Ferdinand and Isabella, despite the fact that St. James lived 800 years before the Muslim conquest of Spain and never approached anywhere near that region. And, instead of the actual Moorish ruler, King Boabdil (Muhammad XII of Granada), Naolincans represent the enemy as Pontius Pilatus (Pilato), the Roman prefect of Judaea at the time of the crucifixion of Jesus of Nazareth. Another historical impossibility.

The dance is held in the last week of September and begins after a parade, in which the dancers participate, leading the image of the town’s patron saint to the local church. In the dance, Santiago appears on his white steed (usually a wooden replica), surrounded by his followers, santiagueros (in Naolinco, Santiago’s followers are sometimes called caines, an apparent reference apparently to the vicious elder son of Adam and Eve in Jewish mythology), and faces off against the King Pilate (Rey Pilato), who wears a crown, and his “Moorish” troops (known simply as pilatos).  The two sides dance to the music of flutes and drums, then stage a mock battle with wooden swords.  Inevitably, Santiago wins the battle.

Santiagueros in Tepetlán accompany the image of the village’s patron saint on a parade to the church.

In Naolinco only, an additional group of negros (blacks) side with the pilatos.  The negros represent a tremendous variety of characters, including death (represented by a skull), animals, Apaches, and assorted mythical beings.  Oddly, the masks of neither the Moors or the negros are dark-skinned, as the North African blacks and Arabs were. Moors are portrayed as light-skinned, like their Catholic opponents, and negros take whatever form and color appeals to the mask maker.

The dance is held in at least ten different townships surrounding Naolinco. They are typically organized by a town leader who keeps the masks, headdresses, costumes, and props in his house or the village church. The dance will be held on the festival in honor of the patron saint of the village, frequently in the church atrium after Mass. They may also dance by special request at the house of someone praying for a favor from the saint.  Naolinco and the surrounding towns are very proud of this tradition, which has been kept alive by dedicated dancers for hundreds of years.

The Rey Pilato and Santiago on horseback wait to begin the dance in San Marcos Atexquilapan. 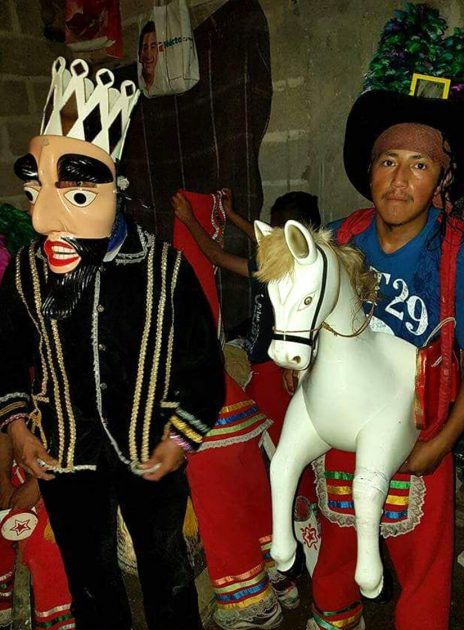 Santiagueros dance in the village of Landero y Coss. 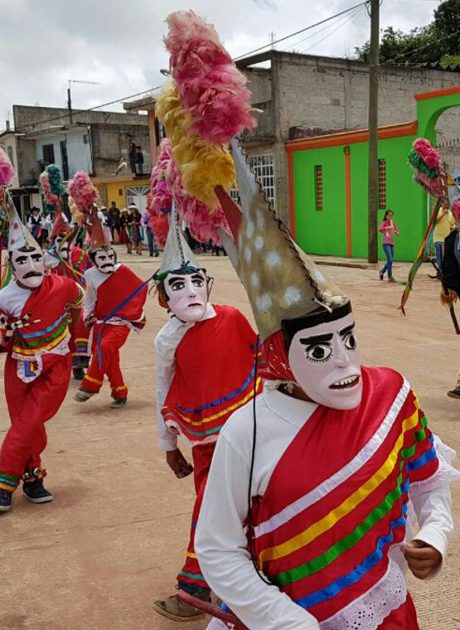 In the village of Tonoyán, the King of the Pilates (left) confers with St.
James the Apostle (right).

The Unique Carnival of Kriens
Scroll to top Second Face