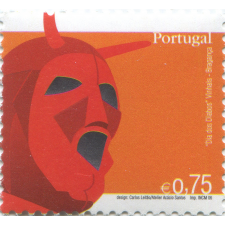 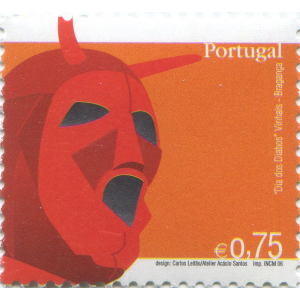 This stamp, issued by the Portuguese government in 2006, is one of a set of six celebrating Portuguese masquerading traditions. The mask depicted on this stamp is used in the Day of the Devils (Dia dos Diabos) Festival in the town of Vinhais in the Bragança District. This festival takes place on Ash Wednesday and involves a parade of thousands of inhabitants dressed as devils following a giant paper maché statue of Death, while they chase girls around the city and, if they catch them before they can take refuge in the church, force them to kneel to be mock whipped while they recite pagan prayers.