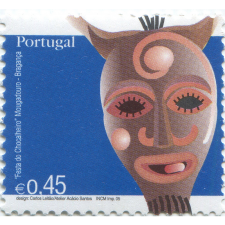 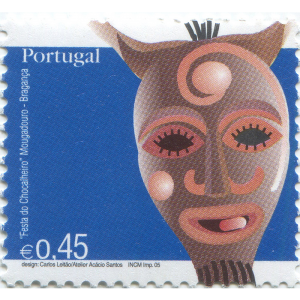 This stamp, issued by the Portuguese government in 2005, is one of a set of five celebrating Portuguese masquerading traditions. The mask depicted on this stamp is a devil used in the Festa do Chocalheiro (Festival of the Chopper) held between the day after Christmas and New Year’s Day, in the town of Mougadouro near Bragança. The Chocalheiro is a demonic figure who clears chimney flues around town with blacksmith tongs in exchange for donations, which he donates to the local church.