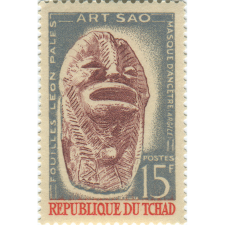 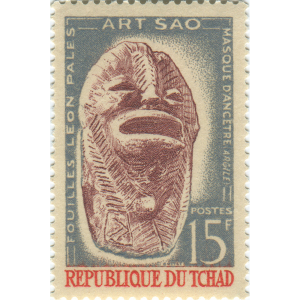 This stamp depicts an ancestor mask of the Sao Civilization, which flourished in Chad and Cameroon from the 6th century to the late 16th century CE. The culture had well developed metal working skills, and masks from the civilization have been found in copper and bronze, as well as terracotta and wood. The traditional Sao culture was extinguished by the spread of Islam in northeastern Africa. Animistic beliefs and ancestor worship have all but disappeared from modern Chad.