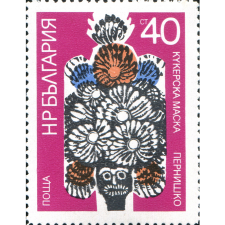 This stamp, issued as part of a set of six by the Bulgarian government in 1973, celebrates the traditional kukeri characters of Surva, Pernik. The kukeri are masked figures that parade through the streets in January, making noise with bells to frighten away winter. Each stamp depicts a slgihtly different kuker mask in somewhat abstractly.