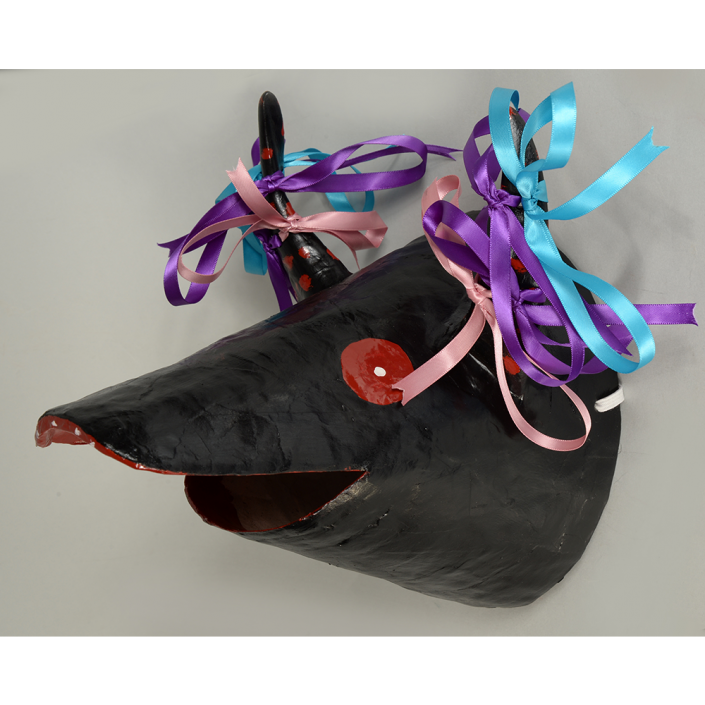 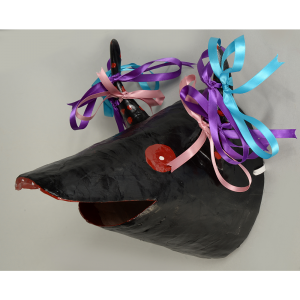 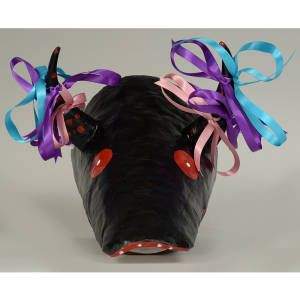 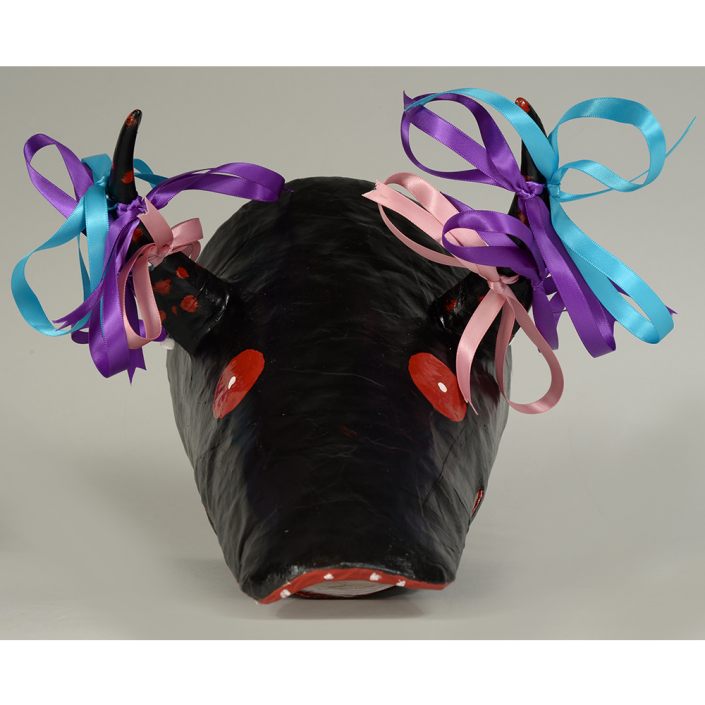 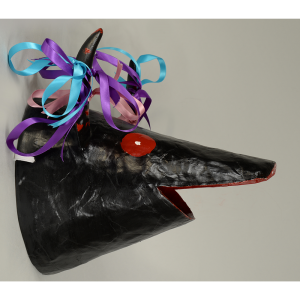 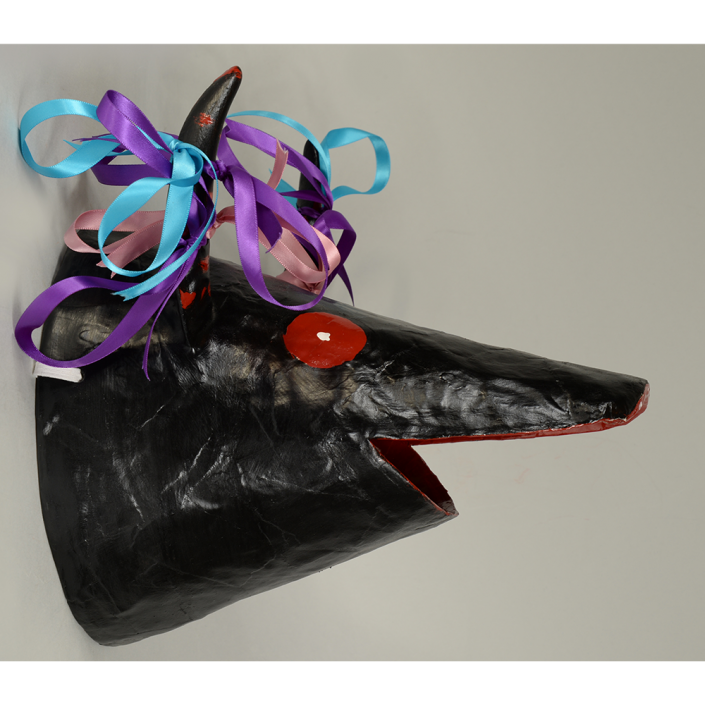 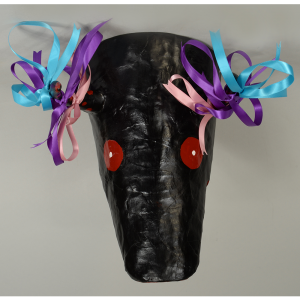 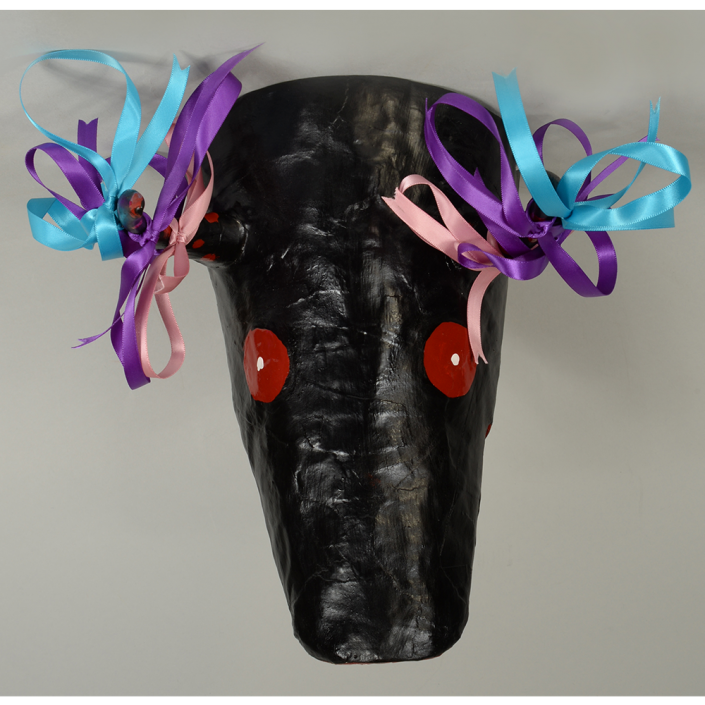 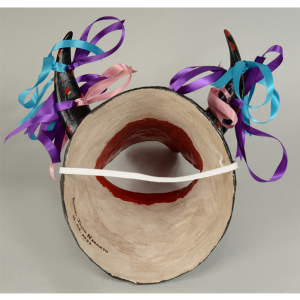 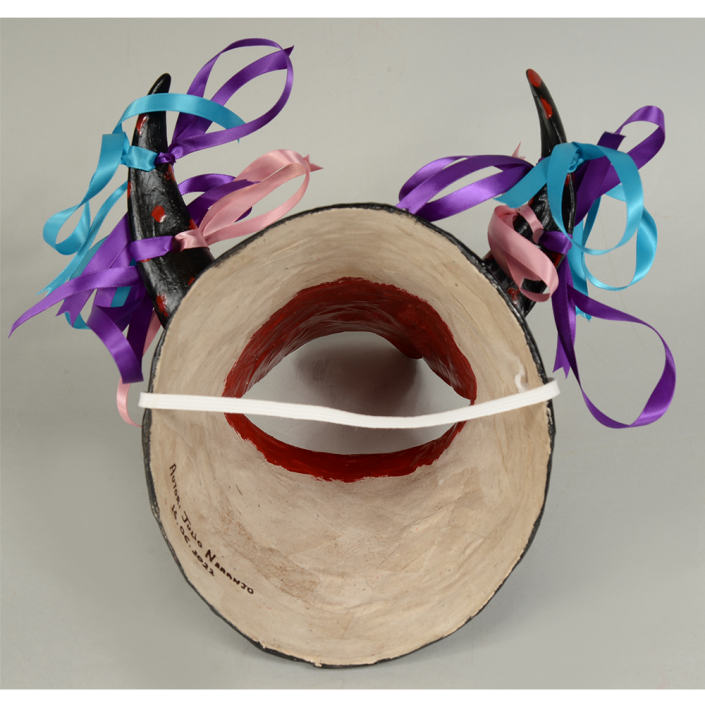 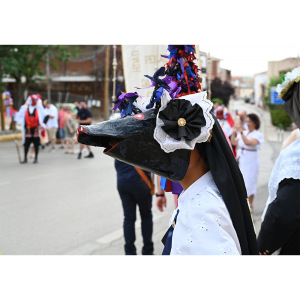 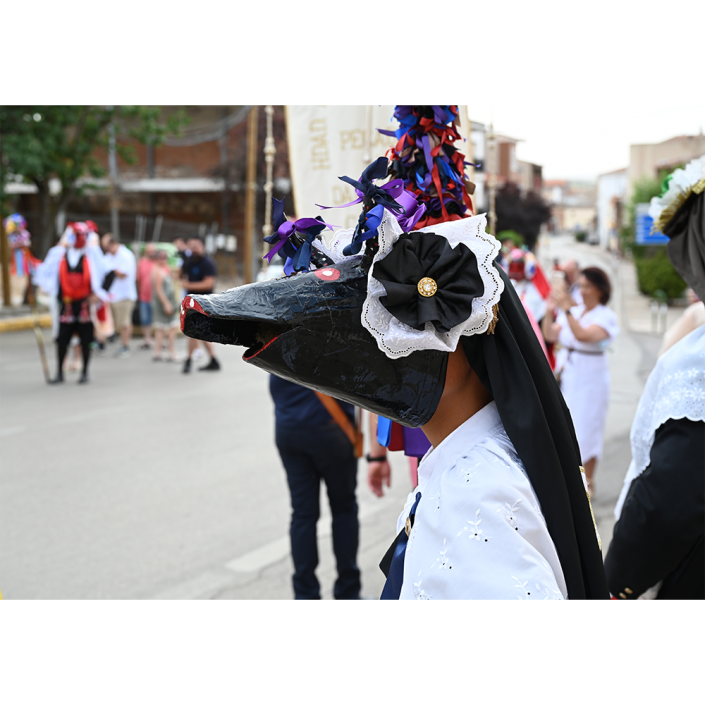 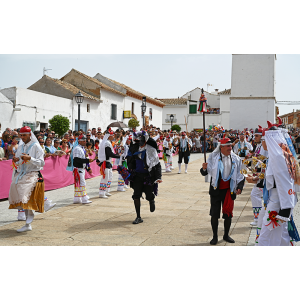 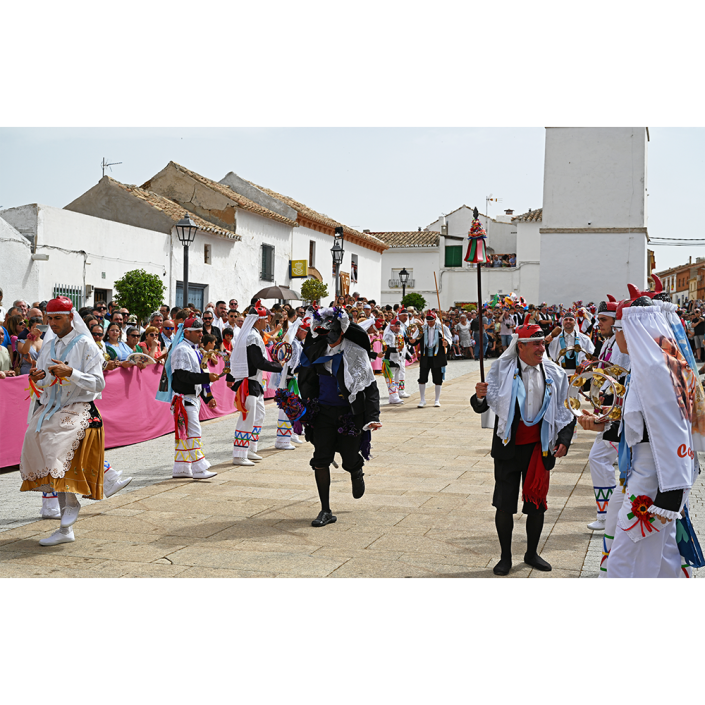 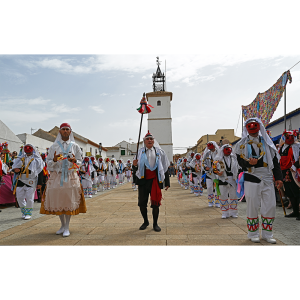 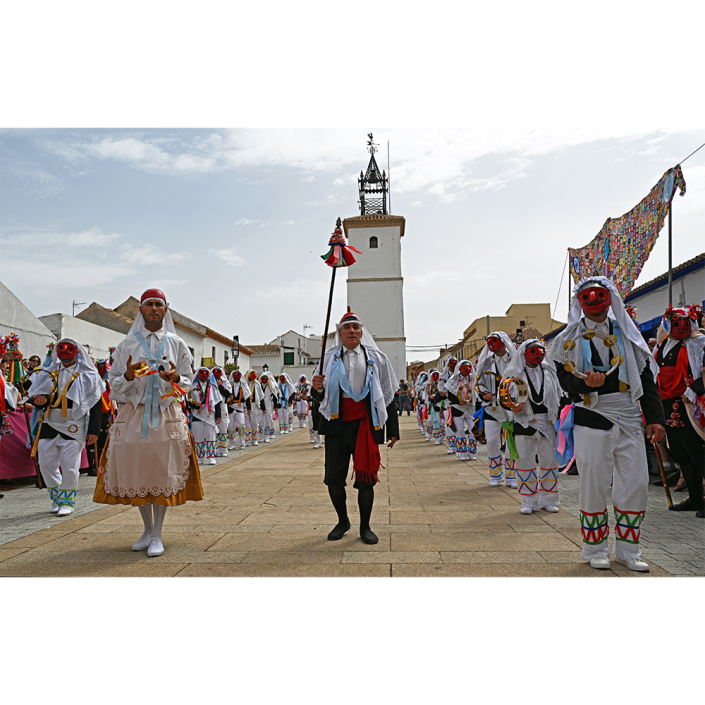 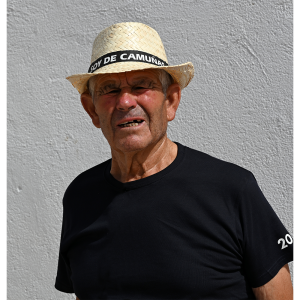 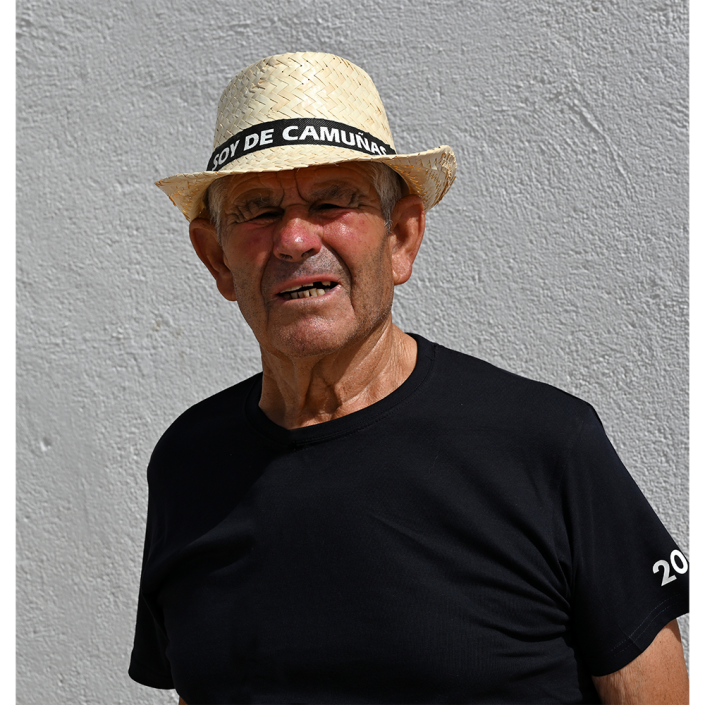 The Corpus Christi celebration of Camuñas, Spain, embodies a tradition hundreds of years old. The celebration is organized by fraternities (hermandades) of “Dancers” (Danzantes) and “Sins” (Pecados). In its broadest sense, the tradition represents a drama of redemption, the triumph of divine grace over sin. The celebration begins with the Danzantes parading through the streets of Camuñas with masks off, jingling tambourines and playing a drum and a unique percussion wood block called la porra. Leading the group is a Capitán carrying a short spear decorated with ribbons. Accompanying them are a standard-bearer with the fraternity’s symbols and a (male) dancer wearing women’s clothes, playing castanets, and wearing a unique mask called the Madama. The Danzantes follow a predetermined, decorated path through town, stopping periodically for refreshments at the homes of the group’s leaders. The leaders after the capitán, in order of seniority, are the Mayor (Alcalde), Elder Jew (Judío Mayor), and the Twine (Cordel).

The Danzantes finally make their way to the headquarters of the Pecados, who greet them in a double file wearing their horned masks. The Pecados carry a decorated staff (la vara) and are organized hierarchically into the senior authority, the Little Sin (Pecailla, or Pecadilla), the Belt (Correa), the Elder Sin (Pecado Mayor), and the Alternate Belt (Suplente Correa). Also included are initiates (novicios).  The Pecailla and Pecado Mayor each have a unique mask, which, together with the common Danzantes, Pecados, and Madama, makes five types of mask used in the celebration.

After enjoying refreshments again, the Danzantes and Pecados parade together across town toward the curate’s house, where they are joined by women in traditional Spanish dress who, with the standard-bearer and a cross-bearer, accompany the curate. The Danzantes form a double line down the street, and the pecados one by one run up the street toward the curate with their masks on, jumping at the end and kneeling before him. They then remove their masks and receive a blessing from the curate.

On the day of Corpus Christi, the same procedure is followed, but afterward the Danzantes and Pecados parade to the church. The Danzantes alone enter the church and parade through the nave, after which they form a double line in the church plaza outside, between the town clock tower and an altar and reliquary at the rear of the church. They all kneel before the altar, then the Danzantes dance, during which the Pecados individually charge toward the altar, leaping and kneeling before the reliquary and removing their mask. The group then continues to parade together through town, performing one last series of charges toward the curate and returning to their fraternity headquarters.

On the day after Corpus Christi, the initiates are dressed in rags and taken to the town windmill in a straw-covered cart, which is symbolically burned while the initiates are symbolically hung using a safety harness in a ritual called La Horca (The Gallows). La Horca is a form of initiation into the fraternities. The townspeople celebrate the intiation with water fights, and traditionally the hung initiate is thoroughly doused with water, somewhat reminiscent of the way Catholic priests convey blessings or baptism by spraying holy water with an aspergillum.

This mask was donated to the Museum through the generosity of the City of Camuñas and its Centro de Interpretación Danzantes y Pecados.

Click here to watch a short documentary on the Corpus Christi celebration of Camuñas, Spain.