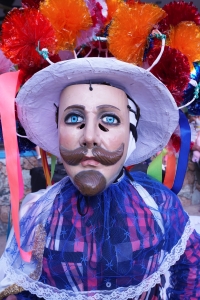 El Salvador has a diverse tradition of masked ceremonies, little known to the world outside the small villages in which they are performed. Like masked ceremonies in many countries, those of El Salvador are often unique to a single village.  Some, however, are practiced nationally or even internationally. In the latter category are Carnival celebrations.  In Latin America, another ceremony practiced in many countries is the Dance of the Moors and Christians.  This dance is performed on special occasions, usually the feast day of the town’s patron saint, in almost every Spanish-speaking country in Latin America and the Caribbean islands.

A Catholic Spaniard as portrayed in the town of Apastepeque.El Salvador is no exception.  There, the dance is often known by the name La Danza de los Historiantes, or “Dance of the Historical Personages.”  Not all towns in El Salvador practice the dance, and where it is practiced, the traditions are quite different (to compare the dance in two different towns, see the video at the bottom of this post). 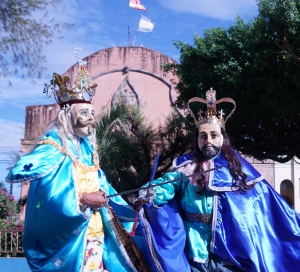 Wherever it is performed, the Dance of the Moors and Christians tells the story of the reconquest of southern Spain (Reconquista) from the Muslim Saracens, completed in 1492.  The Umayyad Caliphate, having invaded from northern Africa in 711, had occupied southern Spain for centuries before the king and queen of northern Spain, Ferdinand and Isabella, finally punished them out of the Iberian peninsula with the help of a coalition army.

After the conquest and colonization of the Americas, the story of the reconquest was taught to the subjugated indigenous peoples by Catholic missionaries as part of an effort to instill respect for and fear of the Spaniards, and to convince them that the victory of Catholicism over other faiths—by violence whenever necessary—was inevitable.

In El Salvador, there are many different versions of the dance of the Moors and Christians.  Depending on the version presented, each is composed of a cast of between ten and eighteen.  In Apastepeque, for example, the dance is performed on the Fiesta de San Sebastián Mártir (Festival of St. Sebastian the Martyr), the town’s patron saint. There are twelve dancers: six male Moors, five male Catholics, and the Catholic queen. Each side has a king, generals, and a clown.  The Spaniards are presented as having black hair, while the Moors are oddly presented as blond. Drum (tambor indio) and Indian flute (carrizo) players provide musical accompaniment.

After assembling, each side makes speeches about the coming holy war while dancing rhythmically. Eventually, each side makes sorties against them other, speechifying constantly while the clowns play tricks on each other and the other warriors. While the clowning is impromptu, the speeches are carefully memorized and repeated.  After a time, the two sides begin a series of individual duels and assemble in front of the church. After nearly three hours, the dance comes to an end with the victory of the Spaniards.

The Moorish king and queen dance, accompanied by their soldiers. 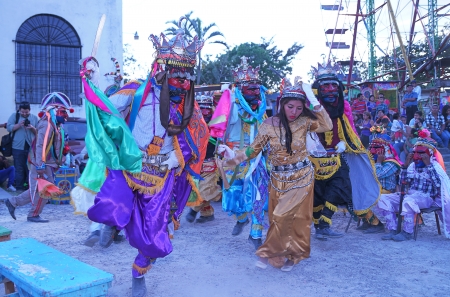 In San Antonio Abad, in contrast, the performance occurs (not surprisingly) during the Fiesta de San Antonio Abad. The cast and the story changes somewhat every year, so that the audience does not hear the precise same sequence.  Unlike the masks of Apastepeque, which are naturalistic, the masks of San Antonio Abad are always red with blue chins, with the Moors having mustaches and beards and the Spaniards clean shaven. The different stories are written a local expert (in this town, Celio López) and always accompanied by drum and flute music.  Each character on each side has a specific name and role, such as the king, the queen, the captain, ambassador, doctor, executioner, and the clown. Different characters appear in different stories.  In some years, there are no king and queen, while in others, they are central characters.  In decorating the costumes, the Catholics always have crucifixes on their headpieces, while the Moors have idolatrous symbols such as snakes, monkeys, or mermaids, as well as the Muslim crescent moon.  In no play does either queen wear a mask, however.

The Historiantes combines storytelling, theater, music, and dance for an original experience that both entertains the community and binds it together in a shared history and culture, while reinforcing Catholic values.

The Spanish and Moorish clowns get each other drunk, but it is part of a Spanish plot to capture a Moorish soldier. 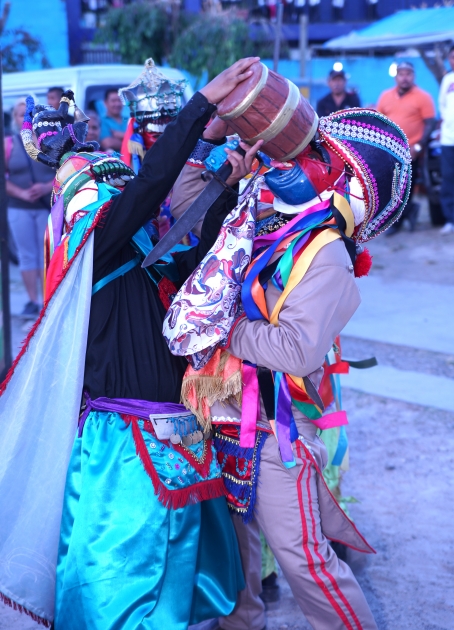 A moor is fitted with his mask in the village square before the dance. 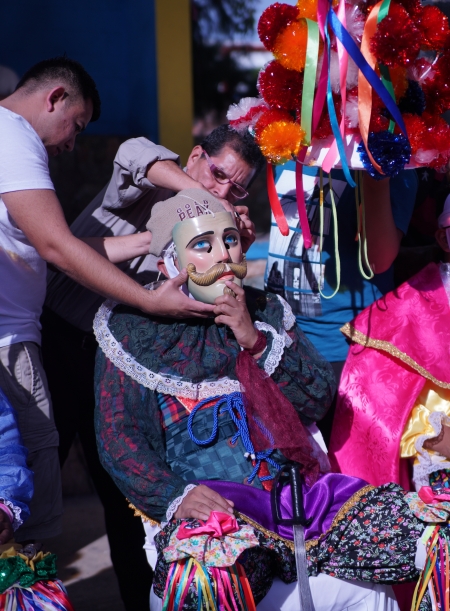 A Moorish prince and a Spanish general cross swords while the king of the Moors and Spanish king and queen watch from the background. 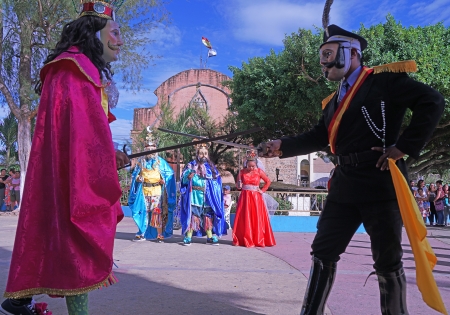 The Moorish clown taunts the Catholic clown and companion as they scout the Moorish army. 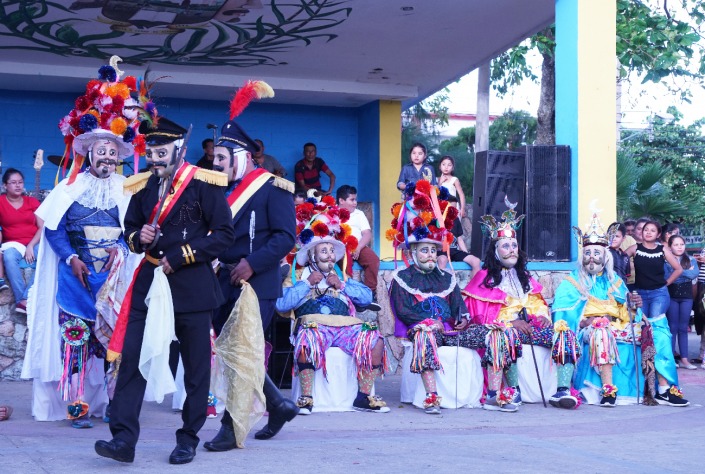 In San Antonio Abad, the Moors and Christians dance in front of the local church. 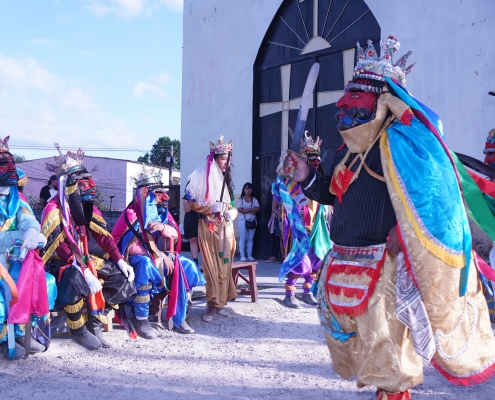 The Spanish bufón (clown) collapses drunkenly onto the Moorish royalty, to the discomfiture of the Moors but the hilarity of the audience. 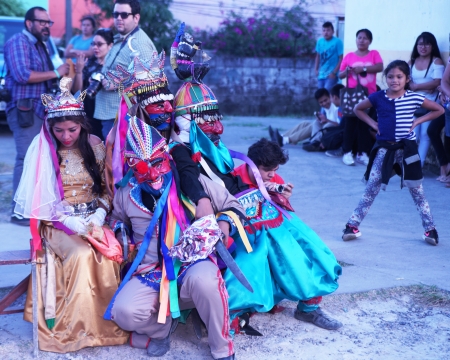 The Historiantes masks of the central region of El Salvador are always red and blue. Other regions use different colors. 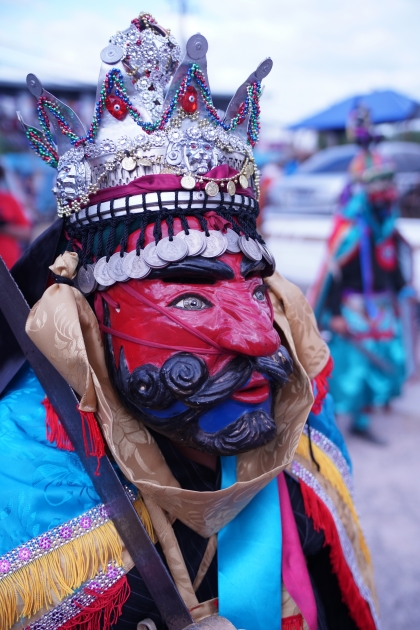